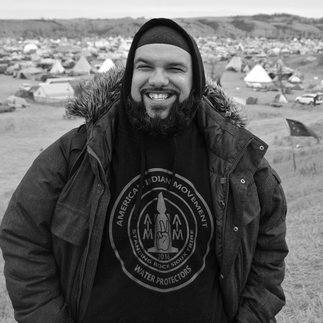 During a recent trip to Standing Rock Reservation. Photo Credit: Erik Andrade
Ernesto "Eroc" Arroyo-Montano is an educator, artist, facilitator, organizer, youth worker, community activist and a proud father of three. Known for his leadership in a range of initiatives from youth program development and intersectional movements building, he has shown his dedication to racial, gender, economic and environmental justice. His contagious passion, warmth and laughter are perhaps his trademark qualities; qualities that he hopes inspires those around him to join the ever evolving movement for peace and justice.

Eroc was born and raised in Boston (Shawmut), Massachusetts to a resilient, tight knit working class family, led by parents who migrated from the American colony of Puerto Rico (Borinquen). His mother, a fierce, cancer surviving womanist, is the matriarch who supported the family of seven, teaching in the Boston Public Schools for over three decades. His father, a soft spoken, yet passionate, community leader and activist went on to become the first Latino in history elected to the Boston City Council. They raised him with a sense of social justice, including a deep respect for the arts, laying the foundation for his future work. Eroc stands on their shoulders and the shoulders of his ancestors.

A founding member of the critically acclaimed and award winning Hip Hop group, Foundation Movement, he is an accomplished speaker, performer and workshop facilitator. He has given keynote speeches and performed at major conferences, large rallies, protests, schools, prisons and universities. Over his 15 year career, Eroc's work has taken him to countries across the globe including South Africa, Tanzania, Japan, Palestine, Cuba, France and England. As an artist, Eroc has shared the stage alongside such radical luminaries as: KRS-One, Dead Prez, Angela Davis, Eve Ensler, Rakim, Noam Chomsky, Sonia Sanchez, The Last Poets, Saul Williams, Suheir Hammad and the late great Howard Zinn and Amiri Baraka.
,
​​His eyes were most opened to the transnational nature of the social justice movement when he joined the Buddhist monks of the Nipponzan-Myōhōji sect in Japan and thousands of local and global activists on a seventy-day walk from Hiroshima to Tokyo in support of nuclear non-proliferation. Locally, he has done a great deal of work, including the development and implementation of a popular education curriculum at an alternative High School in Boston that interweaves art, racial and economic justice, Hip Hop and non-violence, restorative justice, writing, life skills, and history.

His photography and performance-based art has been featured at the Museum of Fine Arts of Boston, the Museum of Science Boston and the Massachusetts State House. His most recent art exhibit “Son of Atabey” is a community based mixed-media project that focuses on using art as a tool to help heal the trauma of colonization, white supremacy, patriarchy, and poverty. He attributes much of his educational evolution to visionaries such as Paulo Freire, James Baldwin, Audre Lorde, Pema Chodron, Waleed Zaiter, Kahlil Gibran and bell hooks.